_Young Victoria_ to be broadcast this week!

"The Young Queen Victoria" by Winterhalter, 1842.
For all those of you who haven't seen _Young Victoria_ yet (including me!), here's your chance!  Beginning Monday, September 20th at 9 p.m., KQED will broadcast the film on channel 54-2 (in Northern California).  It is scheduled to repeat (or finish, I'm not sure which) on Tuesday, and then be shown again the following weekend.

The official website has some good pictures of the costumes, some of which are copied from actual garments worn by Queen Victoria!

California's formal entry into the United States of America occurred on September 9, 1850.  Settled by the Spanish and mostly ignored by later Mexican rulers, who pictured the state as a sleepy backwater with less than 10,000 occupants, California was given to the United States in 1848 as part of the Treaty of Guadalupe Hidalgo, just as gold was being discovered in the northern part of the state.  The earlier independence movement had been initiated by the Californio residents, who were people of mixed Spanish ancestry, born in California (especially descendants of the 18th century Spanish settlers), who identified themselves as Spanish Californians, instead of Mexicans, although Mexico technically ruled the state.  Newly-arrived (since about 1845) foreigners joined in the fight for independence, which resulted in the independent Bear Flag Republic being declared shortly before California's admission by the U.S.  These two events -- the Gold Rush and Statehood -- dramatically and rapidly changed the face of California life forever, and helped make California the place that it is today! 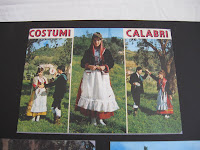 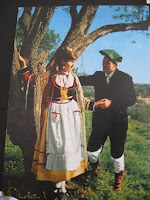 I went to the Italian American Heritage Foundation's Italian Family Festa last weekend! I had been wanting to attend for years but finally made it, and it was a lot of fun. While a lot of it was vendors selling cheesy Italian slogan T-shirts, there was a cool booth with some ladies making Italian bobbin lace, and a bulletin board with color postcards of traditional Italian folk costumes. I have been wanting to make Italian folk costume for a while but now I have some pictures to work with! 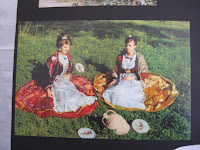 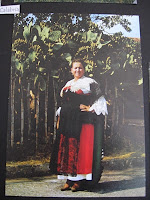 Email ThisBlogThis!Share to TwitterShare to FacebookShare to Pinterest
Labels: Calabria, California, costume, festival, Italian, San Jose, tradition
Newer Posts Older Posts Home
Subscribe to: Posts (Atom)
Now stir the fire, and close the shutters fast,
Let fall the curtains, wheel the sofa round,
And, while the bubbling and loud-hissing urn
Throws up a steamy column, and the cups
That cheer but not inebriate, wait on each,
So let us welcome peaceful evening in.
-- William Cowper (1731-1800)
"The Winter Evening" (Book Four), _The Task_ (1784)