Decaffeinating your tea at home. 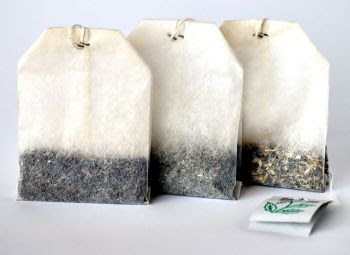 Wikimedia Commons. Tea bags.
Tea is the second most popular beverage in the world, other than water, but many tea-drinkers are advised by their physicians to avoid caffeine. It seems that most people are under the impression that de-caffeinated tea contains no caffeine, and is as safe as “herbal tea” for those who cannot have caffeine. For the record, tea is a beverage that is made from infusing the leaves of the true tea plant, Camellia sinensis, in boiling or hot water. Any leaves, flowers, bark or seeds from other plants, prepared in the same way, are not actually “tea”: they are properly called “herbal infusions” or “tisanes,” and most do not contain caffeine in their plant structure, so infusions made from them are completely caffeine-free.

Caffeine is a natural part of the tea plant, however, and most of the caffeine can be commercially removed. Traditionally, infusions made from commercially decaffeinated tea leaves are of inferior quality due to the extreme processing that the leaves receive to remove the caffeine, and it follows that they produce a beverage that lacks in flavor, compared to regular tea. As a result, de-caffeinated teas can be unsatisfactory to some tea lovers, besides the fact that they still contain small amounts of caffeine, and tea growers, manufacturers, and retailers have been working to solve this dilemma.

Over the past 15 to 20 years, some theories have developed relating to caffeine in tea, and some are repeated as fact, even by the most respected and truly knowledgeable people in the business, such as James Norwood Pratt, author and tea scholar, who wrote the highly-influential books "The Tea Lover's Treasury" (1982), and "The Tea Lover's Companion" (1995). Pratt is the Honorary Director of Imperial Tea Court tea room in San Francisco, and in his “New Tea Lover’s Treasury” from 2000, he describes the process that so many tea lovers have embraced:

"Caffeine is highly soluble and is one of the first constituents of the tea leaf to be extracted in steeping. Usually 80 percent of the tea's caffeine content is released within the first 20 to 30 seconds of steeping. You can enjoy virtually caffeine-free tea with small sacrifice of flavor, therefore, by discarding the water after the first 30 to 60 seconds of steeping and adding fresh hot (temperature depending on tea type) water to the
now-decaffeinated leaf." (Pratt, New Tea Lover's Treasury, p.182)

Unfortunately, the research done to test this theory has provided conflicting conclusions at best, and recent research actually indicates that caffeine is not extracted as quickly or completely from the tea leaf as is widely believed. Many tea experts, including Nigel Melican, founder and managing director of Teacraft, Ltd., consider the "30-second decaf" theory to be actually debunked, and relegated to the realm of urban myth. A 1996 study at Auburn University [Hicks M.B.; Hsieh Y.-H.P.1; Bell L.N. "Tea preparation and its influence on methylxanthine concentration." Food Research International, Volume 29, Number 3, April 1996, pp. 325-330(6)] tested it, infusing multiple samples of tea in boiling water, and concluded that only 9% of the caffeine was removed during the first 30 seconds of infusion. The researchers also found that it took approximately 3 minutes to remove 50% of the caffeine, about 9 minutes of infusion to remove 80%, and approximately 15 minutes to remove more than 96%. A separate study done in 2008 at Asbury College, by Chemistry professor Dr. Bruce Branan and his team provided similar results: after 3 minutes of infusion, only 46-70% of the caffeine was removed, and it took 6 minutes to remove approximately 80%. Since flavor and bitter tannins are also released with the caffeine, a cup of tea brewed after being de-caffeinated by this method would be unpalatable to most people!

While the hot-water decaffeination method does reduce the amount of caffeine in your cup of tea, if you have to avoid all caffeine, you essentially have to avoid all true tea. Tisanes are known to be completely caffeine-free, so until research indicates otherwise, a nice cup of herbal tea is best!

“Too Easy to be True: De-bunking the At-Home Decaffeination Myth” by Bruce Richardson, from Fresh Cup magazine, January 2009.
"Tea and the rate of its infusion” by Professor Michael Spiro. Published in Chemistry in New Zealand, 1981, pp172-174.
“Tea preparation and its influence on methylxanthine concentration” by Monique Hicks, Peggy Hsieh and Leonard Bell, published in Food Research International vol 29, Nos 3-4, pp.325-330.
Posted by South Bay Ladies' Tea Guild at 1:20 PM

Newer Post Older Post Home
Subscribe to: Post Comments (Atom)
Now stir the fire, and close the shutters fast,
Let fall the curtains, wheel the sofa round,
And, while the bubbling and loud-hissing urn
Throws up a steamy column, and the cups
That cheer but not inebriate, wait on each,
So let us welcome peaceful evening in.
-- William Cowper (1731-1800)
"The Winter Evening" (Book Four), _The Task_ (1784)